If you’re wondering what “VPN” means on your phone you have come to the right place. Let us explain exactly what it is and what it stands for.

What Does VPN Mean on My Phone?
A VPN is a program you can run on your phone to encrypt your data better and hide your activity from your Internet service provider. When it is turned on you will see a little “von” icon at the top corner of the screen. You typically use an app from a VPN provider to use these settings.

That’s the short and precise answer. Let’s dig into more details about what a VPN is, when it is recommended, and how you use it.

What Does VPN Stand For on a Phone?

Let’s start by defining what a VPN is.

It’s another way of saying that you will get online through a private connection. By that, we mean a connection that is secure in the way it is encrypted and hidden from other people on the network and your ISP (Internet service provider). Your ISP can be AT&T, CableOne, Comcast, etc.

When you use your phone (or any other device) without a VPN all your browser history will be logged and saved by your ISP and they will know exactly which websites you have visited and much more.

More and more people are getting concerned with data privacy and with good reasons. There have even been examples where ISPs have sold information about their customer’s whereabouts to big advertising companies in order for them to direct ads based on your activity.

But more importantly than that, you can also get much better security when logging unto unsecured wifi networks in places like:

When doing so you are very vulnerable to attacks from hackers and people who’re trying to sniff up your passwords, personal data, credit card info, etc. That’s much more common than people think!

But we’ll get back to that in a second.

Let’s first see what it looks like when a VPN is active on your phone.

What Does VPN Mean at the Top Corner of My Screen? 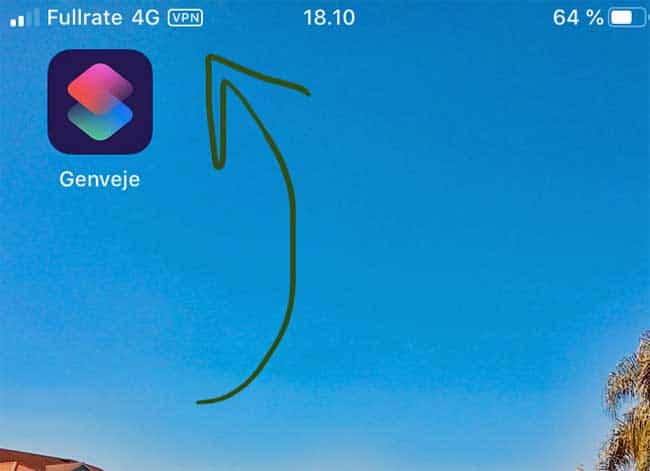 When you see this VPN logo at the top corner screen of your mobile phone it means that you have an active VPN connection running.

A VPN program can be set to automatically start when you turn on your phone or you may have activated it yourself.

The VPN logo is typically shown in a little squared box like the example above. When you see the logo you can do into your phone setting to see where the VPN comes from and which program it is run by.

Here’s how you check that on an iPhone:

Here you can see whether it says “Connected” or not. If you see the squared VPN icon at the top of the screen it means that the VPN is active. It will say on this screen which VPN you are using. Here’s how it currently looks on my iPhone as I’m using a VPN called ExpressVPN:

You can also see the logo at the top of my screen above.

How Do I Turn Off a VPN on My Phone?

If you want to turn off the VPN on your phone you simply go in here:

There’s another way to do it and it is by opening the VPN app from the VPN provider. In the case above it will be an app from XpressVPN or Windscribe. When the app is opened you can simply click the big On/Off button at the center of the screen.

Now you have deactivated the VPN and you will no longer be browsing through an encrypted connection.

For an Android phone, you do it in a similar way. You go to:

And of course, you can also open the VPN app on your Android device and simply turn off the VPN there.

What Does a VPN Do on My Phone?

The VPN program will run in the background to make your connection to the internet secure. By default, you will have all your internet activity logged by your boss or your Internet service provider. That’s not the case when you use a VPN.

On top of that, you are MUCH less vulnerable to attacks by hackers when you’re using your phone out and about. When you hop on open wireless networks it’s quite easy to see what you’re doing.

It only takes a few minutes to access your data when you’re on a public Wifi for an experienced hacker!

Trust me, I know how it is done and just how easy it is. Anyone with technical skills can learn it off the internet (like I did) and access your data. Especially when you’re using public wifi on the bus, in a restaurant, in a hotel lobby, in an airport, etc.

A VPN will protect you in all these situations by making sure that everything you communicate to and from the internet over wifi or while on cellular data will have a very high level of encryption.

Do I Need a VPN on My Phone?

If you are using your phone on unsecured wifi in places like cafes, hotels, airports, etc. you would benefit from using a VPN. The VPNs are very cheap and they will make it much harder to access your private information which can otherwise be stolen quite easily on these low-secured networks.

It’s so easy today to steal personal data and the results can be very frustrating for the victim!

I’ve taken a rather extensive course on how hackers work and how they typically manage to get their hands on private data such as passwords and other personal data.
It’s SURPRISINGLY easy to hack a wifi router in a public space!

So, as always, the answer depends on what you’re using your phone for.

I never use my phone without a VPN when I’m in an airport, a cafe, a restaurant, etc. I will make sure my VPN is turned on so it’s impossible to see what I’m typing in and which passwords I’ve installed on my phone.

How Does a VPN Secure My Phone?

A VPN will work in the background and make sure that ALL the traffic between you and the internet is encrypted. Other than that it will also change your IP so the websites you visit cannot see who you are or where you come from.

Let list exactly how a VPN will make your phone more secure:

What Are the Best VPNs for Phones?

We’re comparing the best VPNs at the moment. And all the serious players in that market also have great apps for iPhone and Android.

Click here to see the comparison and see exactly which VPN providers you should use with your phone!