The majority of the users of Hootsuite, the social media platform made by Canadians Ryan Holmes, David Tedman, and Dario Meli, are in the United States.

Is Hootsuite Canadian Or American?

Hootsuite Media is a Canadian company, established in December 2008. Despite the Canadian roots of the founders, the USA holds over 61% of total Hootsuite users. The percent share of Hootsuite users in Canada is only at 8%.

It is clear that the usage of the site is more geared toward the American policy of social and online capitalism, and is more reflective of how American culture conducts business. 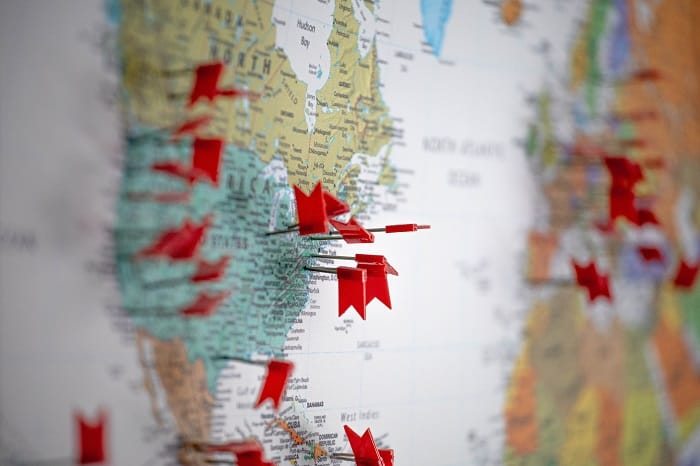 Where is the Main Headquarters of Hootsuite Located?

You can find the main headquarters of Hootsuite in Vancouver, Canada.

The company maintains two headquarters, both located in Vancouver city.

Does Hootsuite Have Offices in Other Locations?

Aside from having 2 headquarters, Hootsuite also maintains another office in Canada.

Their other Canadian office is in Toronto, Ontario.

Hootsuite maintains 2 more offices in North America: one in New York City and another in Mexico.

Hootsuite also has 6 offices in Europe, scattered in different parts of the continent. You can find these offices in London, Paris, Rome, Milan, Hamburg, and Bucharest.

Hootsuite also maintains 1 office in the Asia-Pacific. The office is in Sydney, Australia.

The London office is the first international location of Hootsuite, which opened in 2012.

The Asia-Pacific operations of Hootsuite used to be in Singapore and moved to Sydney in 2019.

Where Are the Most Number of Hootsuite Users Located?

The country that has the most number of Hootsuite users is the USA.

You can find 61% of Hootsuite users there.

Meanwhile, the United Kingdom has the second most number of users, with 12 percent of total users.

Canada, where Hootsuite originates, comes in at third, with 8 percent of total users.

Which Languages Does Hootsuite Support?

Hootsuite supports many different languages, including:

Can You Get Support in Languages Other than English?

Hootsuite only supports the languages listed above, but they continue in their journey toward developing solutions for different nationalities.

Is Hootsuite an Excellent Choice for Non-English Speaking Countries?

Hootsuite has around 16 million users in 175 countries.

Hootsuite has good language support, especially if you are in one of the countries with strong economies.

But there are still languages that need support.

It is also worth noting that more than half of the population of the world is on social media. If you want to establish a multi-language audience, Hootsuite makes a great choice.

The scheduled feature lets you reach your audience in different time zones, without the need to be online.

Does Hootsuite Have a Translator?

You can integrate Google Translate with Hootsuite to help you engage your audience in a language they can understand.

That means the dashboard will be easier to understand, and you can go through the different functions without misunderstanding functions.

Are There Countries That Banned Hootsuite?

While there are countries that ban social media platforms, not a single nation has banned Hootsuite.

Not everyone can take this option.

Only old users could use this workaround.

New Hootsuite subscribers will not be able to add their profiles, as linking social media accounts need actual logging in to connect.

If you plan to go to a country where a particular social media platform is not permitted, try signing up for Hootsuite or other similar services before entering your destination.

Can You Track the Location of your Audience or Market with Hootsuite?

Hootsuite Insights is an add-on service available for Business and Enterprise plan subscribers.

Using Insights, you can search for what people are saying about your product or service, and filter results based on location.

Filtering by location will let you know how many are talking about your brand in an area, the gender, and the acceptance or approval of your product.

Where is the Company Behind Hootsuite Registered?

Invoke Digital, the company that started Hootsuite, is also based in Vancouver.

It is now known as Hootsuite Media Inc. and is still based in Vancouver.

Is Hootsuite a Diverse Company?

A testament to the diversity of Hootsuite is its presence in different countries.

With 10 offices outside Canada, the company encourages different ethnicities to work with them.

Aside from valuing ethnic diversity, Hootsuite also believes in gender equality, having participated in Pride initiatives.

The company sent a contingent to join the march for the LGBT community.

Holmes had served as Chief Executive Officer (CEO) of Hootsuite since its creation.

Tom Keiser, in 2020, replaced Holmes, with the latter now serves as the Chairman of the company.

Who Are the Key People Behind Hootsuite?

Keiser currently serves as the CEO of Hootsuite and is supported by Ryan Donovan as the Chief Technology Officer, Tara Ataya, as the Vice President of People, and Ric Leong as Senior Vice President for Finance.

Where Are the Competitors of Hootsuite Based?

Most of the competitors of Hootsuite are from the USA.

California plays host to 2 social media management tools: Buffer, which is based in San Francisco, and Loomly, which can be found in Oaks.

Spredfast holds office in Austin City, Texas, while Sproutsocial is in Chicago, with 24 other offices around the world.

Will Hootsuite Still Expand to Other Countries?

That remains to be seen.

Given the speculation on why Hootsuite moved from Singapore to Australia, time can only tell if Hootsuite will expand its operations to emerging economies.

Also, the company was looking to sell itself but retracted due to the low bids. That affects the possibilities of future expansions.

HootSuite Kicks Off International Expansion, Swoops Into London, Looking To Hire 50 By 2013