Audible is a very convenient and helpful service if you like listening to audiobooks on demand.


Get Audible 100% FREE for 30 days: Check the offer here
(The links takes you to a new window)

However, there’s no denying that—like many services in the modern world—it heavily caters to English speakers.

But what if English isn’t your first language? Or even if it is, maybe you speak—or want to learn—other languages too and want some Audiobooks recorded in them.

Well, you’re in luck, because Audible does have a growing selection of non-English Audiobooks, and today we’re going to take an in-depth look at exactly that subject!

Here’s The Rundown on Audible in Non-English Languages:

Audible hosts more English-language audiobooks than any other language. However, their selection of non-English-language titles is growing steadily to bridge that gap. Audible currently includes titles in over 180 different languages. Only a handful of languages have dedicated sections on Audible. 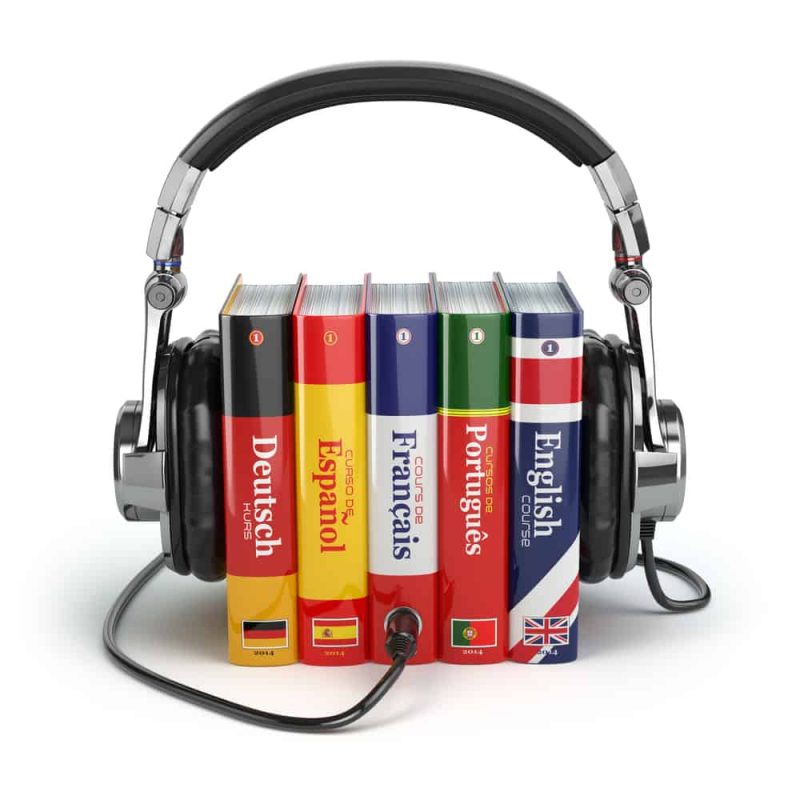 Does Audible Have Titles in Other Languages?

The most prominent languages can rival the English-language selection, while lesser-known languages with fewer global speakers may have only a handful.

The selection of titles in any given language can vary greatly, but Audible has at least a few titles in over 180 different languages.

These selections often include translations of titles originally written in English, as well as original titles written in the language in question.

If you’re wanting to use Audible, but you’re outside of major English-language countries, take a look at our article to find out if or how Audible works in your country.

Is Audible in Spanish?

Audible most certainly does have a host of Spanish-language titles.

Audible currently has over 40,000 Spanish-language titles.

There appears to be quite a selection of Spanish-language titles, both translations of English works as well as books that were originally written in Spanish.

Scrolling through the selection, we found ample nonfiction and fiction, as well as language-learning books for those seeking to learn Spanish.

We also found a lot of self-help books in Spanish, as well as titles on a number of psychological and philosophical subjects.

While it’s a fraction of the total library of mostly English-language titles, 40,000 is certainly a decently sized library.

With that many titles, odds are definitely in your favor for finding a Spanish-language title you’re interested in, be it fiction or nonfiction, on any manner of subjects.

Is Audible in Portuguese?

Audible does have Portuguese-language titles.

From a quick scroll, we saw fiction (especially mysteries), nonfiction, and language-learning books for those interested in learning Portuguese.

History and Philosophy subjects repeatedly appeared when we skimmed the selection, but there appears to be a healthy amount of variety within those 10,000 titles.

Is Audible in German?

Audible does, in fact, have a good selection of German-language titles.

Sitting comfortably at over 50,000 titles, the German selection beats the already-impressive Spanish-language section by about 10,000!

As you might expect for such a large selection, it doesn’t seem to lack variety, either.

Fiction and nonfiction on all sorts of subjects, language-learning books, and more could all be found with a quick search, both translated and German-language originals.

Is Audible in Italian?

With over 20,000 titles to choose from, it’s not the biggest selection on this list by far, but it’s not bad, either.

A variety of nonfiction and fiction subjects exist in the Italian-language selection.

The most common subjects seemed to be history as well as Italian translations of popular English-language fiction series.

Is Audible in Mandarin?

Audible does include a “Chinese” section, but it’s unclear how many of them are in Mandarin and how many might be in Cantonese or other Chinese languages.

The selection is also fairly small compared to many on this list, with only over 1,000 titles.

Presumably, the titles are a mix of Mandarin and Cantonese, and possibly other Chinese languages, but we can’t be sure.

The list includes some translated English-language works but appears to be mainly Chinese-language originals, with a mix of classical Chinese literature and modern texts.

Is Audible in Arabic?

Audible has Arabic titles, though the selection is very limited.

With only 201 results for Arabic-language titles, there’s not nearly as much on offer here as there is for most of the other languages on this list.

Among those 201 titles, there appear to be mostly religious texts, history, and Arabic language-learning books.

Is Audible in Afrikaans?

Audible does have some titles in Afrikaans, but it’s similarly limited.

There are about as many titles in Afrikaans as there are in Arabic,in fact, just around 200.

There does at least appear to be a decent amount of variety within that small selection though, with fiction (including children’s books) and nonfiction on various topics.

Is Audible in Estonian?

Yes, but it’s the smallest selection so far on this list.

Audible has 57 Estonian-language titles.  Most of these titles appear to be podcasts.

Is Audible in Russian?

Audible has over 9,000 Russian-language titles. Not the best, but not bad either.

It’s difficult to say exactly what the Russian-language selection of books is like because very few of the titles are translated.

However, it does appear that both fiction and nonfiction have a healthy Russian-language selection, and a lot of it is written by Russian authors rather than translated.

When it comes to the cost of books on Audible, users can purchase titles using Audible credits or credit card.

Is Audible in Bengali?

While we can’t be 100% sure there aren’t one or two titles floating around in Bengali, Amazon didn’t even put it on their list of languages.

So there is no Bengali-language section on Audible at all, and for the first time going down this list, we seem to have found a language Audible doesn’t have.

Is Audible in Polish?

Audible does have a Polish-language section. That section features a low-to-middling 3,000+ titles.

There seem to be a lot of historical topics in the Polish-language section.

However, it’s difficult to say for sure what kind of variety there is here because most of the search result titles are not translated.

Is Audible in Romanian?

There is a small Romanian-language section in Audible. There are 669 titles in this section at the moment.

Both fiction and nonfiction can be found here on a variety of topics, with a notable preponderance of children’s books in the mix.

Is Audible in Hindi?

Audible does indeed have a Hindi-language section.

At over 1,000 titles, it’s a respectable selection, too, if not the biggest by far.

Historical, religious, and philosophical topics seem to dominate this selection.

Is Audible in Tamil?

Audible has a small Tamil-language selection.

With only 286 titles, the emphasis is on the “small” part. Historical, biographical, classical fiction, and self-help appear to make up the majority of this section.

Is Audible in Vietnamese?

Vietnamese-language books have the smallest selection on this entire list.

There are currently exactly 6 Vietnamese titles on all of Audible.com.

These 6 titles appear to be a smattering of classical works and language-learning books.

What Other Languages Are Available on Audible?

There are supposedly over 180 languages represented in Audible’s total selection, so we definitely can’t list them all.

However, only a handful of languages actually have dedicated sections for them.

If a language doesn’t have its own section, that doesn’t mean no titles in it exist on the platform, but they’re probably so few that Audible didn’t see the point in giving them a dedicated section.

Below is a list of every language we haven’t covered above that has its own section on the website:

If you’re also an Apple Music subscriber, then you may be wondering if you can find music in a variety of languages on the platform.

We look into this and check 12 different languages on Apple Music.

Does Audible Have Books in Other Languages?
Was this article helpful?