A battle has been brewing between the two giants of music streaming and yet there are some solid reasons that Spotify still holds onto its crown as the best in the business.

In this article, you can take a detailed look into why Spotify is better than Apple Music. 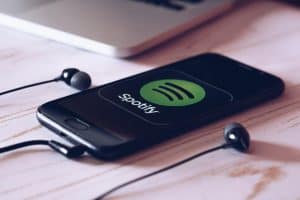 You Just Can’t Beat Being Free With Spotify

Spotify and Apple Music have almost identical payment plans. It’s difficult to tell them apart when it comes to price per month.

That’s right, Spotify allows users to sign up and use their platform for free. This is nothing to be sniffed at.

Spotify users can download the app or listen via the web player and get most of the same features that Premium users enjoy.

The only caveats to using the free version of Spotify are:

If you’re okay with those limitations, then it’s a no-brainer to sign up with Spotify with a free account and start your musical exploration through Spotify’s enormous catalog.

On the subject of different subscriptions and what might suit your particular needs, it’s crucial to point out that Spotify has something special up its sleeve for couples.

Spotify has a specific deal for two people to share a monthly subscription to their platform. This subscription plan is called ‘Duo’.

Read our blog here about 11 ways to get banned from Spotify.

That’s an impressive stat, but it’s no wonder that Spotify wants to keep providing fresh tracks as quickly as they can because they’re in competition with Apple Music.

Apple Music stated that they have 90 million songs in their library and Spotify is closing the gap and will most likely surpass that total due to the content that is continually being uploaded to their platform.

The Spotify founder, Daniel Ek, confirmed in 2019 that Spotify was able to bring around 60,000 new tracks to its community every single day.

If you’re a Spotify user you can be certain that you’ll never run out of music to listen to and, in actual fact, it would be impossible to listen to it all!

The minds at MusicBusinessWorldwide.com estimated that:

These almost incomprehensible numbers speak for themselves – when it comes to new content – Spotify rules supreme.

Discovery Made Simple With Spotify

With all the thousands of tracks being added to Spotify’s library, you may be wondering how you’ll ever discover the hidden gems that suit your musical tastes.

The idea of finding new music can be a daunting task in a world that is now full to the brim with content.

Luckily, Spotify helps to ensure that you discover the music that matters most to you. They call it ‘Discover Weekly’.

However, Discover Weekly is not the only way that Spotify helps you find music that you’ll love.

As previously mentioned, there is a ‘Made For You’ section that can be found from within your ‘Home’ screen and there are tonnes of playlists called ‘Daily Mixes’ that are (as the section name suggests) tailored to your musical tastes.

Spotify makes clear that each of these mixes is:

“based on your listening habits and the artists, genres, and decades you listen to most. (…) you won’t just hear your favorite artists, but your favorite songs from those artists. Then, we supplement by adding in songs we think you’ll love, meaning they’ll be filled with the music you have on repeat alongside some fresh picks.”

Each of the mixes that you find from your ‘Made For You’ section will be updated often and that only increases the chances that you’ll find something that sparks your interest.

What’s more, the algorithm is intended to get continually better the more time you spend using Spotify, meaning that Spotify will choose tracks that you love more consistently over time.

Or, as your musical tastes change, Spotify will change with you to reflect how you are developing as a listener.

Even Free Spotify Users Get A Slice Of The Playlist Action

If you thought that Spotify users with a free account won’t get a chance to see how this works, then think again.

Bottomline, Spotify makes things incredibly easy for users who want to indulge in the music they love the most, and more importantly, broaden their horizons within their specific musical spectrum.

No Longer Merely The Prince Of Podcasts

Podcasts were not originally part of the Spotify package.

Podcasts on Spotify are something that has grown over the past few years, but rightly so.

Now, more than ever, the world is obsessed with podcasts due in part to the fact that they can provide anything from relaxation to information, and entertainment.

It is therefore no wonder that Spotify decided to get into the podcast hosting game.

Now, as DigitalTrends.com points out:

“Spotify has been the fastest growing podcast host since the feature launched in 2015. In fact, it recently dethroned previous champion Apple.”

Spotify became the new king of podcasts because it doesn’t just provide some of the most sought-after shows in the podcast world, but it has certain features that make listening convenient:

Apple Music on the other hand has no such functionality and thus, once again, loses out to Spotify’s podcast-playing prowess.

When it comes to streaming music to other devices, nothing is more frustrating than a connectivity issue.

Whether it’s a Bluetooth speaker, your desktop computer, or even your TV. You want to know that when you hit the play button the music starts.

Now Apple has done its users proud by not limiting Apple Music’s connectivity to Apple products, but Spotify still wins this war.

Communities are important in any online platform and Spotify believes the world of music should be no different.

This is perhaps why Spotify has implemented social features that ensure that users can connect with each other over the music they adore.

Designing something that anyone can use is a challenge, but one that Spotify has risen to.

Spotify is available on Desktop, Android, and iOS, and they even have a dedicated web player.

Anyone who has used either one of the above options will know how simple it is to get to grips with how to use Spotify and that’s because of the intuitive design that is applied to all versions.

Its easy-to-use library, home screen, and search function put it a bar above Apple Music, who despite being the leading geniuses in aesthetics and design, hasn’t quite managed to pull off Spotify’s trick.

However, what really sets Spotify apart is that it works so well on all devices. Apple Music on the other hand naturally favors users who are accessing the platform from an iOS device.

Spotify has no ties to a specific tech manufacturer, and thus, it provides the same great experience no matter what you choose to access the platform from.