All the major VPN services offer apps for iOS and Android so you can use your VPN on your mobiles and tablets.

You might be wondering how much battery it takes for your phone to run a VPN in the background? That’s what we’ve set out to investigate in this article.

Here’s how much battery VPNs use on mobile devices

Mobile devices typically consume around 15% more battery when the VPN app is connected. The battery usage is affected by how strong the cellular signal is and how much Internet data the battery is using.

Here’s an article we wrote about exactly how much battery a VPN uses.

We asked the VPN Services About Battery Usage 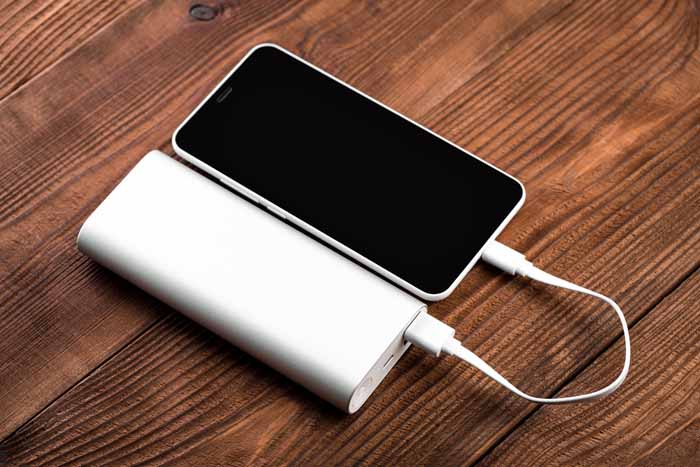 I personally use ExpressVPN, and I’ve also been using two other VPNs previously (CyberGhost and Windscribe). I haven’t noticed any major effect on battery usage. But as I was about to research this topic I decided to ask ExpressVPN and CyberGhost, two of the bigger VPN services.

Here’s what they told me:

“When it comes to battery consumption, there is no difference in using the VPN with other apps for your battery. Its consumption is normal just like any other apps. We do just recommend to turn off the VPN if you no longer using it so that it won’t run in your phone’s background.”

According to the chat support on CyberGhost:

“Phone battery consumption is influenced by how strong is the signal of the mobile network and very much so by the connection to the mobile data network. The same applies to Wi-Fi connections. I’ve been using CyberGhost for a long time now and to be frank, the consumption is bigger by roughly 15%”

How Much Battery Do VPNs Apps Use? (iPhones & Android)

The battery consumption on iPhones and Android is fairly around 10-15% according to CyberGhost, as we saw above. Depending on how much internet data you are using and a few other factors such as:

Most of the VPN services use strong 256-bit encryption that will use around the same amount of battery regardless of which VPN provider you use. You might be able to find a VPN provider that will use less battery on your phone but it will probably also mean that you are not as well protected.

If you are on a very strong 3G, 4G, or 5G signal on your phone the battery usage will be less altogether. This is not only true for the VPN app but also for the phone in general. The thing is that the phone will crank up its signal receiver to the max when there’s bad connection. The closer you are to a cell tower the less battery your phone will use.

That’s true for the VPN app as well.

It’s not something you can plan your day around, I mean the cell towers are where they are and you shouldn’t think too much about it but it’s a factor when we’re talking battery usage.

When I consider my own experience from using my iPhone with VPN services, I’d say that the battery is consumed a little faster when the VPN app runs in the background.

You can certainly preserve some battery life on your phone by turning off the VPN app. Having it running in the background will use battery power.

In a second we’ll look at whether you should turn the VPN on and off to prolong the battery life on your phone. But first, let’s look at how VPNs affect battery usage on iPads and other tables.

IPads have bigger batteries than smartphones so you probably won’t register any difference. You could turn off the VPN connection to preserve a bit of battery but it would not be as important as on phones.

The battery life on iPads and other tablets tends to be much better than on smartphones so you shouldn’t be running out of battery too soon even though you have the VPN connection running in the background all the time.

But if you are on an old tablet you might need to turn it on and off. If you don’t use your iPad for online gaming, browsing, etc. you can definitely just turn the VPN on when you start browsing around and prolong your battery life a bit.

Tips To Preserve The Battery While Using VPNs

Install the VPN on Your Router Instead

You can choose to install your VPN directly on your router on your home network. This allows you to switch the VPN app off altogether when you’re home.

This will definitely preserve some battery life on your phone and there are many other good reasons for doing this as well.

It’s the best way to do it and by doing so you can disconnect the VPN app on your phone as soon as you have switched to your Wi-Fi network.

First and foremost, it will let you make sure that all the devices in your household are protected with encryption and all the other good things you get with an active VPN running between you and the Internet. So, all your mobiles, iPads, laptops, SmartTVs, etc. will be protected when you install your VPN on the router.

I’m traveling a lot so I often use public Wi-Fi spots and unsecured networks in restaurants and hotels. So, I prefer to have the VPN program running at all times. This does drain the battery on my phone a little faster so I make sure to always have external battery banks with me.

In fact, I have a very small battery bank in my jacket that I always have with me. It can recharge my iPhone two times and it lets me get through the day with my VPN active all day long. This way I don’t have to worry about how much battery the VPN app will consume.

Should I Leave VPN App On All The Time?

In general, it depends on what websites you use and which apps you have installed. If you visit a lot of unsecured websites (without SSL/HTTPS) that you think might be trying to track you or attack you it’s important that you keep your VPN turned on.

But if you just use your phone (or tablet) to browse the bigger news sites and websites you trust, you’ll probably do just fine without the VPN app turned on. It will save you some battery if you only turn the VPN on when you visit certain websites or use certain apps that you don’t trust.

I personally recommend having the VPN service switched on all the time on all devices, including tablets and mobiles. I know that I often forget to turn it on and off if I do not decide to keep it active at all times.

The risk here is that you may forget to turn the VPN off if you don’t keep it active at all times. This may leave you vulnerable to unsecured network traffic and other threads on public Wi-Fi networks.

On the other hand, this is what ExpressVPN told us:

“For a VPN app, we do just recommend to disconnect to the VPN when not in use because if you left it connected without turning it off when not in use, the VPN will run on your phone’s background which will, of course, decrease your battery life too.”

So, I guess it depends on how structured you are.

If you think you will remember to turn on the VPN app when you need it you will be fine. But if you’re more spontaneous and unstructured (like me) you’re probably better off with the VPN running all the time. Even though it will use more battery on your phone than switching it on and off.

You can also create a custom profile on your phone that lets you have specific settings for Wi-Fi and LTE. It’s a bit complicated and not a topic for this blog post, but it’s certainly doable for Android devices. This will let the VPN app start up automatically when you hop on LTE.

This will make sure you don’t have Internet access unless you have the VPN connection activated on the phone.

By doing so, you don’t have to worry too much about being connected to unsecured networks.

When you disconnect the VPN the phone will not get online before you turn it back on.

I don’t think this solution is possible with iPhones but it should be possible with most Android devices. You will have to know what you are doing though as it takes you through some pretty advanced steps in the setup process.