For decades, aluminum wiring has been a common material for electrical systems in homes. It’s used for both indoor and outdoor wiring, and it can be found throughout the house.

However, aluminum wiring is not without its problems.

In this blog we will talk about aluminum wiring in houses and when it was used and for what purpose.

Here’s When Aluminum Wiring Was Used in Houses:

Aluminum wiring first became popular after World War II, when copper was in short supply due to the war effort. The switch to aluminum helped ensure that there would be enough copper available for telephone lines and other essential uses. The use of aluminum wiring increased significantly after 1960. 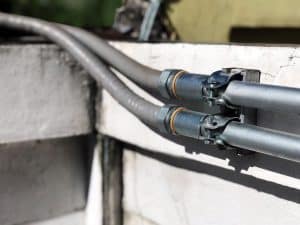 Since then, many homeowners have complained about problems with their aluminum wiring systems.

These issues include overheating during peak usage periods such as air conditioning season; short circuits caused by:

When Did They Start Using Aluminum Wiring in Houses?

Before we dive into the details, let’s start by looking at the PROBLEMATIC aluminum wiring alloy used in houses.

From 1965- 1972 a problematic aluminum alloy was used for wiring houses. This was problematic because the alloy would expand too quickly when becoming hot. This caused many connections to become lose connections.

Lose connections always cause more problems as it can start a fire.

The first aluminum wire was produced in 1882, but it wasn’t until the early 1960s that it started to replace copper as a residential wiring material.

The first use of aluminum wiring was in the early 1900s. At first, the wire was only used for lighting fixtures, but it eventually made its way into homes.

In 1911, Niagara Falls Power Company began using aluminum for transmission lines in New York state. At the time, aluminum was considered a luxury product because of its cost. However, as the price dropped over time, it became more attractive as a residential wiring material.

By 1920, aluminum wire was being used to supply power and transmit telephone signals to remote communities throughout North America. It could also be used in commercial applications — such as street lighting — which helped reduce costs even further.

The first residential aluminum wiring applications didn’t appear until around 1925 when General Electric (GE) began offering their own version of an aluminum conductor under their trademarked name “Alumax.” This type of conductor was designed specifically for use with alternating current (AC) electricity rather than direct current (DC).

Aluminum has several advantages over copper wire: It’s lightweight and flexible, making it easy to work with. Aluminum also conducts electricity better than copper and is less expensive, which makes it an attractive option for manufacturers and consumers alike.

This makes it a good choice for humid environments like kitchens and bathrooms where moisture can cause damage to other types of wiring.

However, aluminum wires are more likely to break than copper wires if they are bent too much or if they get overheated by electrical equipment such as motors or transformers.

This could lead to short circuits or fires if not addressed quickly enough.

When Did They STOP Using Aluminum Wiring in Houses?

Aluminum wiring is still used in many areas of the US. It’s been used since the 1930s and is still very common in homes today.

Most homes built before 1960 have copper wiring. The problematic alloy was used from 1965- 1972 so houses built in that period (and a few years later, in some areas) can have problems with lose connections due to the aluminum used at each end of the wiring.

Aluminum was first used for residential wiring in the 1930s. At that time, copper was too expensive for most people to afford. Aluminum costs less than copper does today, but it also conducts electricity more slowly and heats up more than copper does.

Copper wiring became more affordable during World War II because of demand for war materials like copper and aluminum.

After the war ended, aluminum wiring was no longer necessary because copper was available again at reasonable prices.

However, some areas didn’t fully switch over to using only copper wires until much later because they couldn’t afford to make the transition right away or they didn’t want to spend the money on new wires just yet.

In fact, some areas of the US still use both types of wires today.

In some states, homeowners can still use aluminum wiring if they have an electrician install it correctly.

There are also some areas where aluminum wire is still legal for new construction because there are no codes that require copper wiring for houses built after 1975.

How Can I Know for Sure If a House Has Aluminum Wiring?

The answer is that you can’t know for sure.

The problematic aluminum alloy wiring was used in homes built before 1975. The problem with aluminum wiring is that it’s not very resistant to corrosion, so it can break down over time.

In addition, when aluminum corrodes it leaves a white powdery residue that looks like salt.

This residue is toxic if inhaled or ingested, so if you see white powder in an outlet or light fixture it indicates aluminum corrosion.

If you suspect your house has aluminum wiring, it is best to hire a licensed electrician who can identify the type of wiring and make recommendations on how to proceed safely with repairs or replacements.

Read our blog here about do extension cords contain copper?

How Can You Tell If a Wire Is Made of Aluminum?

The first step in identifying a wire’s material is to know the characteristics of each type of metal.

Aluminum is a soft metal that doesn’t have as much strength as steel. It’s also very light, making it useful for applications like cars that need to be lightweight but strong. It’s also resistant to corrosion, which means it doesn’t rust or corrode easily.

You can tell if a wire is made of aluminum by looking at its color. Aluminum wires are usually silver, but some may be white or even gold. It’s also possible for a wire to be made of several metals, so it might not be as simple as just looking at the color.

You can also tell if a wire is made of aluminum by testing its conductivity. Some non-aluminum wires are coated with a layer of copper, which increases their conductivity while reducing their price.

However, you can easily test whether your wire is pure by using an ohm meter or multimeter.

Is It Illegal to Use Aluminum Wiring Today?

The answer is no, it’s not illegal. However, there are reasons why you should avoid using aluminum wiring in your home and business.

Aluminum is a soft metal that can be easily damaged by corrosion. This is especially true if the wire is in direct contact with soil or other liquids (such as water).

When exposed to moisture, aluminum will quickly corrode and become brittle.

This causes electric current to leak out of the conductor, which can lead to fires and electrical shorts.

In addition to being more susceptible to corrosion than copper, aluminum wire also has higher resistance than copper, which means it requires more power for the same amount of electricity to flow through it.

What Are the Problems with Aluminum Wiring in Houses?

The first is obvious — if there’s a fire, it’s going to spread faster and more fiercely through aluminum wiring than through copper wiring.

The second is less intuitive but just as important — aluminum conducts electricity differently than copper does, which means that it can cause problems with some types of electrical devices or appliances.

The most common example of this is the dimmer switch for incandescent light bulbs (the kind that screw into an overhead socket).

A dimmer switch uses an inductor coil to control the amount of current flowing through it; these coils often use copper wire wound around an iron core to increase their magnetic field strength when they’re turned up high enough to cause problems with aluminum wiring.

Some dimmer switches are designed specifically for use with aluminum wiring; others may not work at all with it without causing damage to both devices or even starting a fire in your home.

Read our blog here about do extension cords need to be grounded?

If you have any concerns about your current electrical system, have an electrician come out and inspect it before using it again.

If you find any evidence of corrosion in your system or if there are signs that there has been damage due to water exposure, you should replace all affected parts immediately before using them again.