If you’re a new or expecting parent investing in a fancy new baby monitor with all the latest bells and whistles, you’ll definitely want to ensure you get your money’s worth.

There are a lot of potential pitfalls you’ll want to avoid when shopping for a new baby monitor, and the popular brand Kidsneed is no exception to this rule.

So today, we’re going to take a close look at the various problems users have reported with Kidsneed baby monitors, and let you decide for yourself whether their products are worth your hard-earned cash. 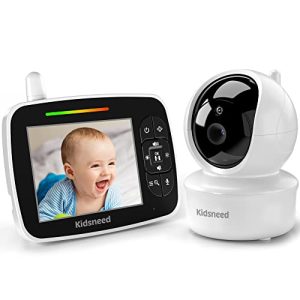 Connection Issues: Why Does my Monitor Constantly Disconnect?

One damming issue many users report is a lack of consistent connection with Kidsneed products.

Many frustrated parents find that even if they triple-check that the device has a solid connection in the spot they choose to set it up, it will lose signal periodically throughout the day and night.

This is a particularly vexing issue because it means the primary function for which you’re even using a monitor in the first place is going to be unreliable.

If half the time you try to check the feed you get nothing but a “no signal” screen, it’s difficult to justify the expense of a device that will only work half the time.

In terms of potential solutions to this issue, it’s possible you might be able to move the device or your router around to try and get a better connection.

That being said, if—like many users who report this issue—you don’t have the same problem with other wireless devices in your home, then it may very well be a fault inherent to the monitor itself, in which case you’re out of luck.

Invalid Warranty: Why Doesn’t this Company Seem to Exist?

Some new parents were enticed by Kidsneed’s ostensibly great warranty, only to find that when they purchased their new monitor, the link they were directed to for the warranty led to a dead page of a company that no longer seems to exist.

This means that if you purchase a Kidsneed monitor, you’re subject to the return policy of whatever retailer you purchased it from, and can forget about any kind of extended warranty guarantee.

After all, how are you going to make a warranty claim on a dead webpage?

In theory, this needn’t be a dealbreaker if the monitor itself would function properly and last a long time, making a lengthy warranty unnecessary if nothing bad ever happens.

Of course, the existence of this very article makes it pretty clear that’s not the case.

You’re effectively rolling the dice on whether or not your new monitor will work consistently, and if it doesn’t, you’d better hope it breaks during the return period of whatever retailer you purchased it from, or you’ll be left with a very expensive doorstop.

In terms of solutions, you’re basically at the mercy of your retailer here. With the absence of any recourse to make warranty claims with the manufacturer, your best bet is to choose a retailer with a reliable return service that offers as large a return window as possible.

Often, you may be able to purchase an extended warranty from the retailer, bypassing the dead company’s warranty with an alternative. That being said, do you really want to pay extra to get a warranty service you were supposed to be guaranteed with your purchase in the first place?

Sudden Death: Why Did my Monitor Stop Working Suddenly?

Many users of Kidsneed baby monitors have reported that their monitor just stopped working suddenly for no apparent reason, and nothing they did could get it functioning again.

Needless to say, this is one of the worst possible problems you can run into, made infinitely worse by the dead warranty page mentioned above.

The worst part? The device often seems to function for 1-5 months before suddenly and inexplicably dying.

This timeframe means it’s very common for the device to seemingly work as intended for the duration of your average retailer’s return period, and stop working sometime shortly thereafter.

Without the ability to return your monitor or make a warranty claim, you’re stuck with a piece of dead technology at this point.

In theory, you could have it repaired by a third party if you’re in this situation, but we’ll take a look at that possibility in another section!

Range Problems: When 900 Feet Is a Lie

Kidsneed wireless baby monitors tend to feature impressive claims on their maximum range, but many users find the truth is far less impressive than the advertising.

Some new parents have reported that while their Kidsneed monitor might otherwise work as advertised, it consistently fails in the department of wireless range.

For many such users, the claims of 900+ feet of range prove to be flat-out lies, and they struggle to get a signal even just 100-200 feet away from the monitor.

If you live in a very small home, this might not be too big an issue, but if you live in that small of a space, you might not even need a monitor in the first place, making the point moot.

Indeed, the entire reason baby monitors exist is to allow you to check on your child at distances from which you might not otherwise notice their cries.

If you have to be so close to your baby that you’d hear them anyway, what’s even the point of a monitor?

In terms of solutions, we sadly don’t have much to suggest. You could try returning and replacing the monitor to see if you just got a defective one, but given the number of people who report this problem, it may just be an innate design flaw.

Read our blog here about 5 problems with Panasonic baby monitors.

Another commonly-reported issue with Kidsneed baby monitors is a tendency for the unit to suddenly stop recharging the batteries when plugged into the charger.

Reviews citing this issue claim that even replacing the charging cable does not solve the issue; the inability to charge the batteries seems inherent to the monitor itself.

While this isn’t technically the same as the device dying entirely—since the unit could still theoretically function if only the battery would charge—it leads to the same end result in practical terms: you can no longer use your baby monitor at all once the batteries run out.

How Do You Reset a Kidsneed Baby Monitor?

Despite our best efforts, we weren’t able to find any specific instructions for resetting Kidsneed monitors when you have connection issues, but we can offer some general tips and best practices.

For starters, always consult the user manual included with your device, as it will have the most applicable information to the model you’re actually using.

That being said, if you’re having difficulty pairing a wireless monitor to its receiver device, try turning them both off, then on again at the same time.

If this doesn’t resolve the issue automatically, manually re-pair the devices to each other.

If you’re still having trouble, you can try setting your Wi-Fi router to a different channel to avoid possible interference with the wireless signal.

Where Can You Get a Baby Monitor Repaired?

In theory, you should be able to have your device repaired for free by its manufacturer as long as you’re still under warranty.

However, as we’ve covered above, you may have trouble with this if you’re using a Kidsneed monitor whose warranty instructions link you to a dead webpage and a company that no longer seems to exist.

In this case, your only options are third-party repair services or extended warranties offered by your retailer. The latter is technically not a repair option, but it will allow you to return a defective product for a new one.

In terms of third-party repair services, several of these exist.

We can’t verify the reliability or legitimacy of any of these services, or whether they’ll cost less than replacing your monitor, so please do your research before you seek any of them out, but suffice it to say you have many options.

Why Is my Baby Monitor Saying No Signal?

There are many reasons why your baby monitor might be experiencing connection issues, from interference to simply a defective product.

Sometimes other wireless devices, including a Wi-Fi router, can interfere with the connection between the monitor and receiver unit of your wireless baby monitor set.

As mentioned above, you can sometimes resolve this by re-pairing the units to each other or by setting your Wi-Fi router to another channel.

However, given the number of reviews we’ve seen on Kidsneed monitors that mention un-solvable connection issues, we’re inclined to believe that the majority of these issues may simply be a result of shoddy manufacturing resulting in a defective product.

While that may not be great news, it does empower you to stop hopelessly fiddling around with settings and realize it may be time to replace the unit with something more effective.

Why Is my Baby Monitor Going Black?

There’s not a whole lot to say here in all honesty. Based on the user feedback we’ve reviewed about Kidsneed baby monitors, it seems many of them simply stop working altogether after a handful of months.

It’s unclear what exactly is causing this, and to be sure, some users are lucky enough to avoid this problem and manage to get a respectable lifespan out of their Kidsneed monitor.

But with that being said, there appears to be a fairly common defect causing Kidsneed monitors to simply die at some point and never function again.

If this happens to you and you have no luck with warranties or returns, a third-party repair may be possible, but be sure to weigh the cost of such a repair against simply replacing the unit, especially if there’s any chance the same thing may just happen again.

In theory, you should be able to get a lifespan on the order of years from baby monitors like those Kidsneed makes (or made, if the company is indeed dead; we haven’t been able to verify one way or the other).

According to user reviews, however, the truth is usually quite different. It seems that the tendency for complete failure we’ve discussed above tends to come anywhere between 1 and 5 months into using the product.

Needless to say, that’s hardly an acceptable lifespan for the price of the product, not to mention that a baby monitor should at least last as long as your baby requires monitoring, which is usually longer than a scant handful of months.

To be fair, we don’t have the data to confirm a specific median lifespan for these monitors, and not everyone experiences this sudden failure after a few months.

What we can say, however, is that enough users report this issue that it seems to be a serious problem, and even if you might be lucky enough to avoid it and get a longer lifespan from the product, you’re effectively rolling the dice by buying one of these monitors.

It may seem we’ve been rather critical of Kidsneed baby monitors in this article, and indeed, there’s a long list of potential problems you should be aware of as a consumer.

But that being said, it is worth noting the majority of reviews for these baby monitors actually are quite positive. Many users actually are satisfied with their device and feel they got their money’s worth.

So with all that in mind, we encourage you to do your research and read some reviews yourself before making a decision.

Ultimately, only you can decide if the risks are worth the potential ease and peace of mind these monitors could offer you and your child if they work as advertised.

Check out our blog about 8 problems with Arlo baby monitors.