Spotify has become a household name due to its dominance within the music streaming world. However, as with all great apps, sometimes users find frustrating issues – one, in particular, is hearing Spotify play random songs.

In this article, we’ll look at why you’re hearing random songs on Spotify and, better yet, how to avoid it from happening.

Everything You Need To Know About Spotify Playing Random Songs

Spotify plays all music on ‘shuffle’ as its default setting. However, this feature can be easily disabled by the tap of a button. It’s important to note that individuals without a Premium account will usually not have an option to select a particular song to listen to. 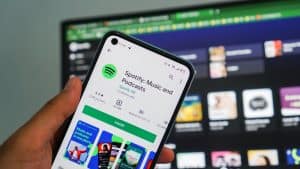 Why Does Spotify Play A Different Song Than What I Clicked?

Sometimes you just need to hear your favorite song – no excuses – whether you’re on your way to work, just felt the stab of heartbreak, or you need to get your groove on, you’ll find that song and get it playing.

However, if you’ve selected a song on Spotify and for some reason it doesn’t play, there’s going to be no head bobbing. Instead, the chances are, you’re going to be feeling a tad frustrated.

Users have experienced this issue on both the app version of Spotify and the web player.

The reasons for this happening are as follows:

Does Spotify Have Auto-Shuffle Enabled By Default?

The shuffle feature allows Spotify users surprises, whether that’s finding a new song by accident, or throwing an unexpected gem into a great mix.

However, having our playlists or albums on shuffle isn’t always what we desire. It can interfere with how we’ve curated a playlist or mess with the ‘story’ or how an album is meant to be heard.

You may have noticed that when you’re using Spotify to play music it seems to automatically be on shuffle.

“All Spotify playlists play on shuffle by default – double-tapping [the first song] will get them to play in order. “

So despite Spotify enabling auto-shuffle as default, it’s as simple as a quick double-tap to get your songs to play in the order they were meant to be heard in.

Can You Avoid Listening To Random Songs On The Free Plan?

Let’s start with the bad news first – if you’re using the Spotify app with a free account there’s no way to switch off the shuffle feature. It’s part and parcel of not paying for a Premium account.

However, there is a way to switch off shuffle on the desktop version of Spotify, even if you have a free account.

If you want to get through an album or a playlist in order, and without random songs getting in your way, then follow these steps:

Why Can’t I Select Which Songs Spotify Should Play?

Spotify plans are not created equally. If you’re currently on their ‘free’ plan and not ‘Premium’ then you should know that there are some big differences.

Premium plan Spotify users can enjoy unlimited skips, whereas the free version only allows 6 per hour, and playback will be interrupted with regular ads.

However, this is not what usually frustrates users the most. Instead, the biggest issue is actually the most prominent difference between the two plans.

The folks at SoundGuys.com compared Spotify’s Premium and free plans and found that users who opted for a free account couldn’t pick and choose specific songs to listen to:

“Rather, you can select an album or a playlist and shuffle the songs in it. This can get annoying when you have an earworm and just need to listen to that particular song. With Premium, you can listen to that song over and over to your little heart’s content.”

However, there are certain situations in which users on a free plan can select a song to listen to.

How Do I Stop Spotify From Playing Random Songs?

If randomly selected songs are not your jam, then it’s easy to find the solution you need.

Ensuring that the auto-shuffle feature is switched off is as simple as opening your app and tapping the correct icon. Remember, only users with a Premium plan can do this.

Deactivating Spotify’s Shuffle On iOS Or Android (Premium Users Only)

Follow these steps if you’ve decided it’s time to put an end to the randomness of when tracks are played on your Spotify app:

There are also a few other things to note when it comes to switching off the shuffle feature:

How To Stop Spotify From Playing Random Songs After A Playlist?

You may have got to what you thought was the end of one of your playlists and bizarrely found that the songs keep coming.

You may have also noticed that these songs at the end of your playlist were not chosen by you.

If you’ve got to the end of one of your specially curated playlists and are now having to listen to some unwanted random tracks then don’t panic, there’s a way to prevent this from happening.

The trick to this is ensuring that Spotify’s ‘auto-play’ feature is switched off in your settings.

How To Deactivate ‘Auto-Play’ In Spotify

If you want your playlist to only play the songs that you picked and not play any additional unknown extras at the end, then you should take the following steps:

It’s as simple as that; no more random songs at the end of your playlists.

Why Does Spotify Add Random Songs?

So you’ve worked out how to stop those random songs from raining down at the end of your playlists, but perhaps you’re wondering why it happens in the first place.

The answer is simple:

How Do I Stop Random Play On Spotify?

If you’re sick of random tracks and the inability to select specific songs from an album or playlist then it’s time to sign up for a Premium Spotify account.

There’s no doubt about it, Premium members get a far better experience, one of which is the fact that it puts an end to random play.

Signing up for a Premium account is simple, but you do have a few options to choose from: