Spotify is the king of music streaming, but did you know that as well as its app version, Spotify also has a web player?

In this article, we look at some of the most common questions that users have about Spotify’s web player.

Everything You Need To Know About Spotify Web Player

Spotify’s web player is very similar to its app version. It allows users to stream music, create playlists, and like songs. However, some features are missing from the web player such as: 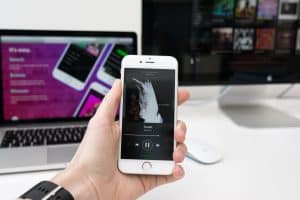 Despite this, Spotify’s web player is useful for those who are using computers that do not allow any software to be downloaded onto them, such as machines in corporate environments.

Does Spotify’s Web Player Have Ads?

Spotify’s web player does have some differences in comparison to the app version, however, when it comes to ads, it doesn’t matter what you use to listen to your Spotify tunes.

Whether you hear ads on Spotify’s web player comes down to what type of account you have.

So if you are hearing ads whilst you are using Spotify’s web player the reason why is because you’re on a free account.

Some users who were on Spotify’s free plan managed to get around the issue of ads by using 3rd party ad blockers.

This allowed those users to circumvent one of the main caveats of being a free user on Spotify.

However, Spotify got wise to this workaround and updated their web player to ensure that free users could not abuse their platform.

Now, since the update, if a user is detected using 3rd party ad blockers on their web player it can result in the user’s account being banned – that really will interfere with listening to your Spotify playlists!

It may sound like a harsh punishment for free Spotify users who just can’t stand the relentless ads in between listening to their favorite music, however, as Express.co.uk pointed out:

“The strict crackdown is likely to stem [from] significant revenue losses for the streaming service.”

The bottom line here is that if you want to listen ad-free, whether on the web player or not, you should upgrade to a premium Spotify account.

Is Spotify’s Web Player Free To Use?

You can definitely use Spotify’s web player for free without the need to pay anything at all.

The web player allows users to start listening without even the need to download any software, all you need is a free Spotify account.

Spotify’s web player can be accessed directly from your internet browser because it is, in essence, just another website.

Additionally, this is a website that gives you access to an enormous amount of listening content, and, what’s more, it allows you to use almost all of the same features that you would have on their app version.

How Is The Web Player Different From The App?

The differences between Spotify’s web player and app versions are relatively small.

That’s great news for anyone who is worried about missing out on features, as well as those who are concerned that it may be difficult to learn how to switch between the two.

Thankfully, Spotify’s easy-to-use interface is implemented in all versions of Spotify, even the web player!

That said, you may find that certain aspects, such as the layout, will differ between the apps and the web player.

These differences are merely aesthetic and are meant to help users access the features they need more easily.

For example, the app version of Spotify places the library at the bottom of the home screen, whereas on the web player, you’ll find it on the right-hand side of your screen.

One of the benefits of the web player is that it has more screen space, which allows more of Spotify’s features to be displayed at once. This allows you to quickly access what you need by simply moving your cursor around the screen.

The app version has to be condensed to fit within the display of a mobile device and so certain features need to be minimized and accessed through icons instead.

So, now we’ve got the aesthetic differences out the way, let’s look at what features Spotify’s web player is missing in comparison to its app counterpart:

Read this blog here about should Spotify have access to my camera?

Here’s One Of The Best Things About Using Spotify’s Web Player:

So, although there are some differences between the apps and the web player, it’s important to point out one of the web player’s biggest advantages:

Can You Download Songs On The Spotify Web Player?

One big difference between the Spotify web player and the apps that we didn’t mention is that it is not possible to download songs.

Only Spotify Premium members have the ability to download tunes for offline mode, but whether you are a premium member or not, when it comes to the web player there’s no option to do so. It’s simply for streaming music.

Can You Use The Spotify Web Player On Phones?

You can certainly use Spotify web player on your phone whether you’re on Android or iOs.

However, there are some key things you need to know:

Why Does The Web Player Keep Pausing For Me?

The most common reason why the Spotify web player keeps pausing is because of an unstable internet connection. To fix this try connecting to another network, or restarting your router.

How To Do Private Sessions On The Spotify Web Player?

Private sessions used to be supported on the web player, but since a software update a few years ago this feature has been removed.

Spotify does, however, suggest an alternative for members that are looking to hide their music feed from friends and family; but it does involve having to download the Spotify app.

Since you have changed your privacy settings within the app, when you go to use the web player, your listening habits will now be anonymous.

To turn this off, simply go back to the app and toggle ‘Share listening feed’ back on.

Can You See Friend Activity On Spotify’s Web Player?

Unfortunately, members using the Spotify web player do not have the ability to view friend activity like they can with the desktop and mobile app.

This topic has been gaining traction across the Spotify community, with many avid Spotify users calling for an update over the past few years.

However, there is no guarantee that Spotify will release this feature for the web player any time soon, so if you are wanting to view your friend’s activity feed, it is probably best to just stick to the Spotify app for now.

Can You Add Songs To A Playlist On Spotify’s Web Player?

Adding individual songs to a playlist whilst using Spotify’s web player is incredibly straightforward. You can add songs to a current playlist, or, add them to a completely new playlist.

Here’s how to add songs to a playlist using the web player:

You can also choose to ‘Create Playlist’ using the plus icon on the main menu on your home screen. From here you can search for each song, and simply click ‘add’ to include them in your new playlist.