These days it seems like every popular app or service asks for a lot of personal information from you.

Or worse, they may take such information without even asking, or bury it in the dense legalese of those terms of service and privacy policies that nobody reads.

If you’re concerned about how Spotify may be harvesting your data and what they might be doing with it, read on, because that’s exactly what we’re diving into today.

Here’s Why Spotify Asks for your Information:

Spotify requires certain information, such as billing details for paid subscribers, to perform its function. Spotify may also collect additional data from both paid and free users. This additional information may be sold to third-party advertisers. 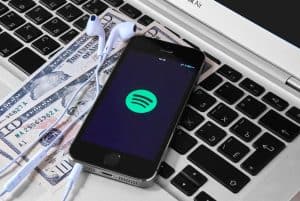 Why Does Spotify Ask About my Age?

Spotify uses a complex algorithm to figure out what kind of music it thinks you’ll like.

Your actual listening habits form the bulk of this information, but other details, like your age, may also play a part in what kinds of music Spotify is most likely to recommend to you.

After all, statistics exist showing what kinds of genres, artists, and styles of music are favored by different age groups.

Being as generous as possible and assuming no ill intent for the sake of argument, Spotify could simply be using this as one of many details with which to tailor your music-listening experience.

It could also be doing other, more invasive things with this information, but more on that later.

Why Does Spotify Ask About my Address?

If you’re a paid subscriber, Spotify needs your billing address as part of your payment information.

This is a standard requirement for online purchases of all types, and a Spotify subscription is no exception.

However, if you are not subscribed to Spotify nor have ever made a purchase of any kind from them, they should not be asking for your address, and it should worry you if they do.

That being said, if the only time it’s ever come up is when paying for a subscription, this is normal and not cause for concern.

Why Does Spotify Ask About my Date of Birth?

Asking for one’s date of birth is fairly common with online services that have any kind of age-restricted content.

Spotify includes both censored and uncensored versions of songs with explicit lyrics, which fall under the category of age-restricted content.

Thus, asking for your date of birth shields Spotify from liability and lets them limit access to explicit content for underage users.

Why Does Spotify Ask About my Gender?

Spotify doesn’t really need to know your gender to do its job as a music-streaming service, but it likely does use this information to tailor your experience.

Just as there are statistics identifying the average listening habits of different age groups, so too are there similar statistics showing what genders tend to be interested in what kinds of music.

Once again, the bulk of Spotify’s suggestions is going to be tailored to what you actually listen to while using Spotify.

However, data points like age and gender simply add, in theory, one more way for Spotify to try and figure out what music you’ll like the most.

All that being said, there is really no excuse for requiring this information.

Including it as an optional field would make sense, but Spotify does not actually need to know your gender, and the fact they don’t let you sign up without telling them is a red flag.

What Does Spotify Do with my Data?

The short answer is that we don’t know for sure because, like many data-collecting companies, Spotify tends to be rather opaque about what exactly happens with the data they harvest.

Spotify does offer some informational videos like this one designed to explain how your data is gathered and harvested, but they’re painfully oversimplified and leave a lot out.

Most corporations that do any kind of data-harvesting and selling recognize that they need to at least appear like they take your privacy seriously so that you’ll keep using their service.

However, the marketing and PR people whose job it is to reassure you are very good at making things sound nice and simple while obfuscating what’s going on behind the curtain.

Is the Data Shared with Third Party Companies?

Almost definitely. This isn’t a conspiracy theory, this is just what companies do with your data these days.

The fact that major corporations harvest and sell your data is easily verifiable and has become so normalized it’s not even a shocking statement anymore.

If you’re a free user, Spotify still makes money off you by sharing information with third-party advertisers, which this article argues are its “real customers.”

Spotify almost definitely makes more money off of data-selling than it does from actual subscription fees, and as such the service itself is just a means to an end.

Because of this, your data is likely being collected and sold even if you are a paid user.

It may not be as obvious because you’re not seeing tailored ads all the time, but that doesn’t mean it’s not happening.

What’s the Minimum Amount of Information you Must Share with Spotify?

This is a difficult question to answer because ultimately the control is all in Spotify’s hands.

You can do your best not to provide them with extra data, and you can turn off the most invasive features in your privacy settings.

But even then, you can’t be sure what’s happening behind the curtain.

You can be sure that Spotify will do its best to make money off you in whatever way it can get away with, no matter how much information you withhold and how much you tweak your settings.

Ultimately, the only way to be sure Spotify isn’t collecting your data is to stop using Spotify.

Why Does Spotify Family Need my Address?

Spotify Family requires that all members of the family account are living in the same house. You have to provide your address to verify this fact.

If not for this requirement, people could share Spotify accounts with friends and family living anywhere in the world.

This means slightly less money for Spotify, so naturally, they can’t have that.

Can Spotify Actually Check the Address of Users?

Yes, but not because they have any special superpower.

In fact, home addresses are generally considered public information, so if they know where to look, anyone could check your address in theory.

This is easiest if you’re listed in a phone book, of course, but even if you opt out, you could be looked up via the Land Office or other means.