It can be pretty annoying to be listening to one of your favorite songs and realizing all the explicit lyrics have been cut out, especially if you’re a grown adult who doesn’t need to be sheltered.

Or worse still, trying to play the song only to find that it’s blocked entirely and won’t let you listen.

If you’ve ever been in a situation like this with Apple Music and want to know what to do about it, keep reading, because that’s exactly what we’re going to be exploring today.

Here’s What We Know About Apple Music Censorship:

Apple Music offers both clean and explicit versions of tracks that contain profanity. The settings menu allows you to turn explicit content on or off. Sometimes albums may be incorrectly categorized as clean or explicit due to automation. Apll has this in place to protect users from profanity. 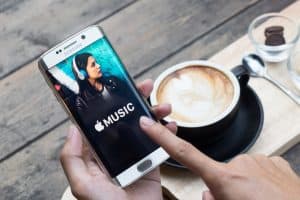 Why Does Apple Music Care what Music You Listen To?

Well, in a sense, the entire “job” of the software and the service it provides are to care about what you listen to.

That is to say, streaming services like Apple Music and its competitors are designed to “figure out” what kind of music you like listening to so they can tailor your experience accordingly.

This includes details like whether you tend to listen to clean or explicit versions of a given track or album, when applicable.

Beyond that, though, legally speaking Apple has to care about censoring music for underage listeners.

Even if you’re an adult and this doesn’t apply to you, the fact that the company must legally include these options affects your experience using the service.

Especially because errors occur in the process of censoring explicit content, and enforcing that censorship, especially when a lot of the process is automated.

You might get a completely inoffensive lyric censored because it sounds close to an expletive and the bot looking for words to censor can’t tell the difference.

Sometimes, entire albums get miscategorized, such as the clean and explicit versions of said album being reversed; the explicit one mislabeled as clean, and vice-versa.

To top it all off, many users report that despite ensuring they have explicit content enabled in their settings and being of adult age, they still get censored versions when playing their favorite songs.

What Are the Criteria for Apple Music’s Censoring?

We don’t know the exact criteria by which Apple’s algorithms are programmed to detect and censor explicit content, because the company isn’t releasing that information.

We do know the basic guidelines most media companies need to observe to avoid getting in trouble for exposing minors to profanity, however.

We obviously can’t list the actual words here, but anything that most people consider a “swear word” has to be censored.

Likewise, any discussion of sexual and/or violent acts that wouldn’t be allowed in a PG movie is also going to need to be censored in music that underage listeners might have access to.

Read our blog here about is Apple Music dying along with iTunes?

How Do You Disable Censoring on Apple Music?

In theory, all you need to do to turn censorship of explicit content on or off is to open up your settings and check or uncheck a single box.

Specifically, you need to click the menu bar in the Music app, hit preferences, then restrictions, and look for a checkbox under “restrict” that reads “music with explicit content.”

Now just check that box if you want to censor the music (such as if you’re setting up a device for a minor or just prefer clean versions yourself), or make sure it’s unchecked if you don’t.

Of course, if it really were that easy every time, we wouldn’t need to write this article, because everyone would, in theory, be able to censor or un-censor their music with one checkbox.

And to be sure, this does seem to be enough for some users, but for reasons we can’t entirely explain, it doesn’t work for everyone.

In fact, not only do some users report that they have trouble listening to uncensored music even after making sure explicit music is enabled in their settings, but it can go even further.

Apple Music has been known to swap out the versions of songs in your library for the “clean” and/or “radio friendly” versions of the same track.

What’s more, this has been observed to happen even in music that users already had in their library before subscribing to Apple Music.

This means that not only can Apple Music make it difficult to listen to explicit tracks through their own service, but it can actually mess with the music you already own on top of that.

Needless to say, this is a very frustrating situation to be in, and it’s an understandable reason that some users have unsubscribed and deleted the Music app to prevent their libraries from being tampered with.

We already covered why Apple would need to provide censorship of explicit content for underage users, or in practice, to allow parents of those users to censor their experience.

As for why this censorship has so many issues and can insidiously creep into users’ personal libraries, however, we can’t say for certain.

We have seen multiple reports on discussion boards that the Dolby Atmos functionality could be part of the problem.

For some, finding and disabling Dolby Atmos settings in Apple Music fixes this problem, and prevents explicit tracks from being randomly swapped for clean variants.

This guide explains both what Dolby Atmos actually is, and how to enable or disable it, so if just unchecking “restrict music with explicit content” doesn’t work for you, try this fix next.

Unfortunately, this fix doesn’t seem to work for everyone either, and frankly, we’re at a loss to explain why.

If you’re able to fix the issue by disabling both the general censorship setting and Dolby Atmos, then you should be able to return to your normal listening experience.

However, if you’re unlucky enough to still be having trouble after both these steps, or you’re worried about the integrity of your personal music library, abandoning Apple Music may be your best bet.

Only you can decide what’s worth it for you, and Apple Music certainly has a lot to offer in the way of convenient access to a huge library of music.

However, the issues discussed in this article are a perfect example of why it can be dangerous to allow apps and services access to your personal files, and why it might be best to avoid apps that demand such access, like Apple Music.