If you like to make big playlists on Spotify and listen to them on shuffle, you might have noticed a tendency for the same handful of songs to repeat again and again.

Needless to say, this can be frustrating if your goal is to listen to random songs on the playlist to keep it interesting.

So why does Spotify do this? Is there a way around it? Well, strap in, because these are exactly the questions we’re going to do our best to answer today!

Spotify Shuffle chooses which songs on a playlist to prioritize based on several factors. Those songs that Spotify perceives that you enjoy most are most likely to play first and repeat most often. This is to give listeners the best experience every single time they use the app. 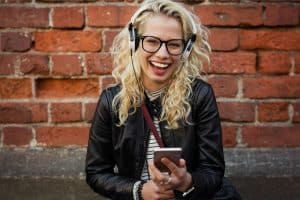 No, Spotify Shuffle is very much not “truly” random, for a couple of reasons.

Firstly, if we’re going to talk about randomness when it comes to computers (not just PC; your phone is a computer too!), it’s worth noting that computers are almost never truly random.

This is because modern computers process information in a very logical, step-by-step fashion.

High-end machines can do this very, very fast, but they’re still following a clear step-by-step process, even if you can’t tell because it’s happening so quickly.

When everything the computer does is so rigid and logical, randomness presents a problem. How can you move on to the next step without knowing what it’s supposed to be?

For this reason, computers use algorithms to simulate randomness by going through strings of pseudo-random numbers.

Even without Spotify Shuffle’s other problem (more on that in a moment), it would never be capable of true randomness, and the difference can be noticeable if you pay attention.

But that’s only the tip of the iceberg here because Spotify Shuffle is even less random than your average pseudo-random algorithm.

This is because Spotify assigns a certain “weight” to songs based on how much it thinks you like them (how many times you’ve played them, mostly).

The songs with the higher “weight” will play more often because Spotify thinks you like them and will like hearing them more.

Unfortunately, this creates a bit of a feedback loop where you only hear the same 20 songs on your hundreds-long playlist because Spotify thinks they’re your favorites.

And it only gets worse from there, because every time you listen to these songs, all you’re doing is convincing Spotify that they’re your favorites and should keep being prioritized.

Read our blog here about should Spotify have access to my camera?

Does Spotify Just Repeat the Same Songs on Shuffle?

Yes and no. As we just discussed, Spotify playlists on Shuffle mode will prioritize songs that Spotify “thinks” you like most.

This doesn’t mean other songs can’t come up too, however, it just means they’ll come up far less than the handful of songs you hear most.

So yes, Spotify Shuffle does tend to repeat a handful of songs over and over, but not exclusively; other songs will be played too sometimes, but far, far less frequently than the “favorites.”

Can You Make Spotify Shuffle All Your Songs?

You certainly could make a playlist with every single song you like to listen to, and set it to shuffle, but the problem isn’t going to go away with a longer song list.

In fact, it might actually make it worse. The shorter the playlist, the fewer options Spotify has to prioritize, and the more likely something new might come up as a result.

But if you make a playlist out of all your music, Spotify Shuffle is just going to grab the same handful of songs it thinks you like most and play them over and over, with something else mixed in very occasionally, if you’re lucky.

What Setting Can You Adjust with Spotify Shuffle?

In short: there is no such setting. Shuffle mode works the way it does and you can’t really tweak it.

The people who designed it that way have a certain idea of what will be most “engaging” to the user and keep you listening, and user customization often doesn’t factor into that vision.

So the Shuffle feature is the way it is because some executive or another thought it was a good idea, and now we’re all stuck with it.

Does Spotify Have a “True Shuffle” Function?

However, an idea has been proposed in 2021 that is still live today, so at the very least it may be being considered.

One thing is clear: if you’re annoyed with Spotify’s Shuffle feature as it is, and would like a truly random option, you’re far from alone.

Since the idea is still live at the time of this writing, this also means you can go add your voice to the problem and try to convince Spotify’s leadership to add this feature.

Sadly, there’s not much else that can be done beyond suggesting features, because services like Spotify are controlled entirely by the corporation that owns them.

This means you have no real power in situations like this, other than to stop using Spotify because any control or customization you’re allowed is only given at Spotify’s discretion.

What Is the Best Way to Play Spotify Playlists at Random?

Sadly, there currently isn’t a good solution for this. There are some things you can do, but none of them are true solutions to the problem at hand and require compromise.

One trick you can try is to split your big playlists up into multiple, much smaller ones to make them a little more random.

The fewer songs on a list, the fewer options Spotify has to try and choose what it thinks your favorites are, and the more likely to are to hear most or all of the songs on the playlist.

Of course, this means making a bunch of tiny playlists that you then have to manually start, and start the next one when it’s over, and so on.

If you like long playlists so you can hit shuffle and let them play for hours and hours in the background, splitting them up into tiny ones isn’t an ideal solution.

Another potential trick is to manually order the songs in a playlist so that different artists, albums, etc are all mixed up in the playlist.

Then, don’t even use the shuffle button, just play from the beginning in the “shuffled” order you set manually.

You can start the playlist from different points at different times to keep it fresh. Start at the beginning one day, halfway through a different day, and so on.

Of course, it’s pretty tedious to manually order your songs in a pleasingly shuffled way, and more than a little frustrating considering the entire point of a shuffle feature is to do that for you.

Finally, the last solution is to take your shuffled playlists out of Spotify entirely: buy the music you want and support your favorite artists in the process.

Then use any old media player app to make your playlist and shuffle it.

This doesn’t solve Spotify’s problem, but you could always use Spotify to discover new artists, then buy their music and make playlists.

It would certainly ensure that far more of your money spent actually went to the artist, supporting their work so they can keep making more music.

Read our blog here about why are Spotify lyrics wrong sometimes?