If you’re a live streamer, chances are you’ve at least thought about inviting friends to your stream or collaborating with other streamers by streaming together.

Well, the good news is this is not only quite possible but pretty easy and straightforward if you use StreamYard.

Let’s take a look at how StreamYard handles guests and co-hosts.

To get one thing out of the way right off the bat, a Stream yard stream can only have one “true” host at a time, and that will be whoever started the original stream. However you—as the host—can invite guests to your stream, but you can set a “co-host” who also has control over the broadcast. 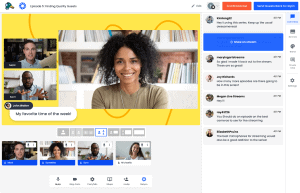 By doing this the guest can do the same sorts of things a host can, such as changing scenes and settings during the stream.

How Do You Add Additional Hosts on StreamYard?

Inviting guests onto your stream on the fly is pretty easy. You just hit the “invite guest” button and copy-paste the invite link into chat or send it to them through email, that easy!

However, if you want to set someone up to be more than just a guest on your stream and give them co-host privileges, you’re going to need to use the StreamYard Teams feature.

Follow this handy step-by-step guide to use StreamYard Teams for Co-Hosting:

Read this blog about can you pre-record on StreamYard?

How Many Hosts Can Streamyard Handle?

The size of your StreamYard team depends upon your subscription model. With the free version, you can only have a team of two, meaning you and one additional host (or admin).

There are paid options for larger team sizes—meaning more hosts—that allow you to have a team of up to 5, 10, or 15 max, at increasing monthly or annual prices. For details on paid plan options, see this page (scroll to the bottom).

There’s also a hard limit to how many people can be live in your stream, be they the owner, admin, co-host, or just invited guests. This limit is also partly dependent on your paid or free plan status, and goes as follows:

What’s the Difference Between the Host and the Co-Host?

The Owner and Co-Host team roles have different privileges when it comes to controlling, starting, or stopping the stream. There’s also a third role called “admin” with its own set of privileges.

Let’s take a look at the three team roles available in StreamYard teams and what they can do:

The owner is the person who creates the team. There can be only one owner, and it’s whoever created the team and invited everyone else.

The owner has full privileges and can create or delete a team or individual members, in addition to everything an admin and co-host can do.

An admin can do almost everything the team owner can do. The only thing an admin can’t do is delete the team, but they can start broadcasts, invite new members to the team, and assign roles just like the owner.

Admins can also do everything co-hosts can do.

A co-host can’t start a broadcast, but they can do pretty much everything an owner or admin can do within the broadcast, once it’s started.

This effectively means that while your co-host can’t start streaming without you, once you start a stream, they can change scenes, graphics, and so on during the stream just like you can.

What Happens if a Host Leaves the Broadcast?

If your co-host leaves the broadcast but you (as the team owner) or any team member you’ve given the role of admin—admins can start and stop streams too—the stream should continue just fine without the co-host.

But what about if the team owner or admin who started the stream disconnects? If there’s nobody else in the stream with the ability to stop or start it, it’s unclear exactly what will happen.

As far as we can tell, the stream will keep going until someone with the relevant privileges stops the broadcast, no matter who might disconnect mid-stream. However, we were unable to verify or test this ourselves, so don’t take our word for it!

Can You Demote a Co-Host During a Broadcast?

If you are the team owner, you’ll be able to add or remove members in your StreamYard dashboard and change their roles as you see fit.

However, once you start a broadcast, it’s unclear whether you’ll be able to demote or remove team members on the fly. While we were unable to verify whether or not this is possible, it might be the case that you’ll have to stop the broadcast before you can change your team composition again.

As such, you must be able to trust anyone who you make an admin or co-host on your team. After all, you’re collaborating as partners, so you should be able to trust that your team members won’t be working against you or trying to seize control of the project.

If you do need to demote or remove a team member for any reason, you’ll be able to do this in your team dashboard. While it’s unclear if you can do it mid-stream, even in the worst-case scenario, you can still stop the broadcast and then demote or remove the problematic team member.

Check out our blog about can guests in StreamYard share screen?

StreamYard could invite guests since the beginning but lacked solid tools for collaboration until the StreamYard Teams feature was added. Thanks to this feature, it’s now possible to add administrators and co-hosts to your streams who you can collaborate with as you see fit.

However, due to the rather strict limitations of the free plan (only one other team member) and the top-down nature of the team structure, StreamYard Teams still leaves something to be desired in the way of true collaboration.

While admins and co-hosts can do a lot of the same things the team owner can do, at the end of the day, the owner is the only one with the ultimate power to remove members or delete the team entirely.

In other words, as we mentioned at the beginning, StreamYard still only really supports one “true” host in a given stream, and that host (the team owner) has the ultimate authority. This means it is still impossible for two or more streamers to collaborate on an even playing field, as there doesn’t appear to be any way to change the top-down nature of the Teams feature.

That said, as long as everyone involved trusts one another and can work out a team structure that works for everyone, collaboration is far more possible than it has ever been in StreamYard thanks to StreamYard Teams.

Perhaps in the future, StreamYard Teams will expand in functionality, and allow for true collaboration without the top-down structure imposed on every team. But until then, we hope this overview has given you a good idea of what you can do, and happy streaming!