Wi-Fi baby monitors are all the rage these days, as you’ve no doubt noticed if you or someone you know is an expecting parent shopping around for a good baby monitor.

But what other options are there for them to connect to the internet?

In today’s article we will answer this question once and for all.

Here’s If You Can Use A Wi-Fi Baby Monitor Without Wi-Fi:

You can use a Wi-Fi baby monitor without Wi-Fi. The monitor will require a wired connection to the camera. This is called an “IP” connection and it’s the most common way to connect a camera to a monitor. You can use any existing Ethernet cable that you might have for another device. 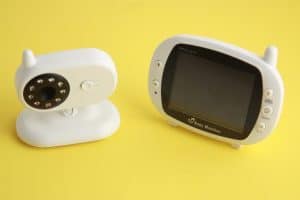 First off, let’s get the disclaimer out of the way: many manufacturers are making Wi-Fi baby monitors and we can’t guarantee that 100% of them will all work the same way, so be sure and do some research on a given model to make sure it does what you want it to.

With that being said, most Wi-Fi baby monitors do not technically require an internet connection to work, meaning you’ll still be able to use them even when you lack working internet, with some caveats.

This is because Wi-Fi devices must first connect to your Local Area Network (LAN) before they connect to the internet.

In other words, while your Wi-Fi router supplies internet from your modem to Wi-Fi devices through radio waves broadcast around your home, that same radio-wave network will still exist even without internet, and devices can still communicate across it.

This is the same principle by which you can still send a document to a remote printer without internet, or email your co-worker on the office network because the devices in question are still connected to each other via the network, internet or not.

This means that most Wi-Fi baby monitors will keep functioning when you lose internet, but they will only work at home; you’ll still be able to check on your baby from other parts of the house, but not if you leave the house.

Check out this other blog here about why are baby monitors so expensive?

What Happens When the Wi-Fi Signals Falls Out?

If you’re not at home when it loses connection, you’ll be unable to check the monitor feed remotely. However, whoever is at home with the baby will still be able to use the monitor normally.

If you are at home when you lose connection, nothing out of the ordinary should happen with your baby monitor.

As long as your receiver or the smartphone you have the monitoring app installed on is connected to the same network as the monitor, the connection between them should continue uninterrupted.

So, as long as you trust whoever you leave at home to watch the baby when you go out—which should be a given with anyone you allow to care for your child anyway—you needn’t worry overmuch if your home loses internet.

Of course, a major selling point of Wi-Fi baby monitors is the ability to check on your child from anywhere, so it can be frustrating when the feature you paid extra for won’t work because of an outage at home.

Sadly, there’s not much that can be done about this beyond switching to a more reliable ISP if it’s an option, or re-evaluating whether you really needed this feature in the first place.

In short, your baby monitor will keep working during an internet outage, but it will have similar functionality as much cheaper models that might be worth considering as alternatives if you don’t want to end up paying for a feature that stops working whenever there’s an internet problem.

Read our article about do baby monitors work both ways?

Do All Baby Monitors Require Wi-Fi?

Wi-Fi didn’t even exist when baby monitors were invented, and wouldn’t for over half a century.

Wi-Fi baby monitors may be so ubiquitous nowadays that it comes as a surprise to hear there are alternatives, but there are in fact plenty of baby monitors still being made that do not use Wi-Fi, or an internet connection of any sort, for that matter.

In fact, specifically non-internet baby monitors have recently made a bit of a resurgence in popularity lately due to some concerns over the usefulness and safety of Wi-Fi baby monitors.

Wi-Fi baby monitors, in short, are much easier to hack and can be accessed by a potential hacker from anywhere in the world. And yes, sadly, there are creeps out there who do actually do this.

Further, some concerns have been raised over Wi-Fi baby monitors actually increasing anxiety in parents in a counter-intuitive manner, because the ability to check on your child from anywhere can lead to overprotective obsessiveness that’s not really healthy for you or your child.

For both of these reasons and more, it’s pretty easy to find non-Wi-Fi baby monitors on the market with a variety of price points and features, including both audio-only and video monitor designs.

Can You Use Wi-Fi Baby Monitors on Cellphone Data?

The short answer to this question is “probably not.”

The longer answer is that we must re-iterate our disclaimer that we cannot be 100% sure such an option doesn’t exist on some model somewhere because there are so many different baby monitors on the market that it’s nearly impossible to rule out any remotely plausible feature entirely.

But with all that being said, baby monitors are not cell phones and don’t usually allow you to connect them via mobile data.

Some monitors do allow you to use your cell phone as the receiver unit with an app, but in this case, only your phone could use mobile data, while the monitor device still likely cannot.

Further, some parents have been known to use smart devices like phones and tablets as a viable alternative to purpose-made baby monitors.

In other words, if you can set up a tablet, phone, or laptop in a position to watch over your baby, then with the right apps you could then use a second smart device as the receiver. in this instance, it would be possible for both devices to use mobile data.

So while no products specifically marketed as baby monitors (that we know of!) likely have this as a feature, you could feasibly create a “baby monitor” system by using devices that do allow mobile data.

Read our other blog about how do non-wi-fi baby monitors work?