Baby monitors are one of the most useful inventions for new parents, but they also seem like they could be a bit complicated.

You might not know whether your baby monitor requires Wi-Fi or how it transmits video. And you might wonder if they can pose a security risk to your network (and maybe even to the rest of the internet).

In this article, we’ll explain how baby monitors work and give you some tips on keeping yours safe.

There are plenty of ways to watch over your kids without having WiFi in the home — including baby monitors. Radio signals are one of the oldest methods used for communication. You can also use radio signals for sending information back and forth between devices. 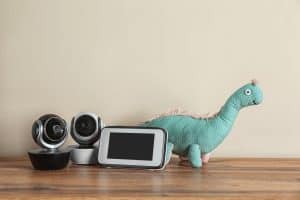 Analog refers to a system based on continuous values while digital refers to discrete values.

Can Baby Monitors Work Without Wi-Fi?

Yes, baby monitors can work without WiFi. If you’re unfamiliar with analog baby monitors, they’re just like their WiFi counterparts in that they use a radio signal to transmit data from the nursery to your smartphone or tablet.

The difference is that they don’t require an internet connection to work.

However, for parents who want peace of mind without spending too much money or looking like a tech nerd with a high-tech baby monitor, analog may be the way to go.

How Do Baby Monitors Without Wi-Fi Connect?

It is not a modern concept, but it has been around for quite some time. In fact, the first baby monitor was invented in 1901 by Almon Clow Reed who referred to them as “telephonic nursing call transmitters”.

His design used wires to connect the transmitter and receiver together so that they could communicate with each other through a constant connection.

However, despite their high level of popularity today, not all baby monitors require Wi-Fi or Bluetooth to work properly because there are different types of technology that are used instead of those two more commonly known ones.

Check this blog here about how do non-wi-fi baby monitors work?

What Is the Best Technology for Baby Monitors?

Wi-Fi is the most commonly used technology for baby monitors. It allows you to connect your monitor with a smartphone app, which means you can check in on your little one from anywhere.

If a Wi-Fi connection isn’t available or if you don’t have internet at home, some monitors will have a cellular option that lets you stream video remotely through the internet.

If you want an affordable baby monitor with excellent range and sound quality, consider purchasing one that doesn’t use Wi-Fi or Bluetooth but instead relies on radio frequencies (RF).

RF monitors are less expensive than their alternative counterparts because they do not require additional hardware or installation fees like Wi-Fi and Bluetooth devices do. However, they may have weaker signals than other types of monitors due to their lower power output.

One of the main advantages of Wi-Fi is that it’s reliable and secure.

You can connect your baby monitor to your wireless network with ease, so you don’t need to worry about interference from other devices or neighbors like you would on Bluetooth or a local network.

Additionally, because most people already have access to their home Wi-Fi networks, many parents prefer this type of system for convenience sake alone.

There are fewer wires involved in setting up a Wi-Fi baby monitor than with traditional wired systems (such as those using Ethernet cables), which means less clutter around the house as well.

Also worth mentioning is that since this technology is so common among different brands and models today—it has become nearly universal within just about every product category out there including tablets/laptops/phones etc.

While these systems can be very convenient and easy to use, they do have a few drawbacks. In addition to the fact that you’ll need to purchase a separate monitor if you want audio-only monitoring, Wi-Fi and Bluetooth baby monitors are more expensive than their networked counterparts. Additionally, both wireless types suffer from other problems:

No, not all video baby monitors require Wi-Fi.

In fact, many of them don’t use it at all. Instead, they use other types of wireless data transfer protocols to send the signals from your camera to your monitor.

This means you can still enjoy the benefits of a wifi-enabled camera with a standard monitor that doesn’t have wifi capabilities built in—all without having to pay any fees or subscribe to any services.

You can use VTech baby monitors without Wi-Fi or cellular service.

In fact, there are four ways to set up a VTech baby monitor: over a network connection, standard phone line, cellular network, or Bluetooth connection.

The good news is that all of these methods work great with your home Wi-Fi system. But if you don’t have access to Wi-Fi at your baby’s nursery or the device you want to connect doesn’t support it (for example, an older smartphone), no worries.

There’s still plenty of options for keeping in touch with baby from outside the house.

There are two main types of baby monitors which are digital and analog; they mainly vary in how they transmit data.

Digital baby monitors use radio waves to transmit. Analogue ones do too, but this type of transmission can’t be encrypted, so it’s not as secure as a digital signal would be.

When the monitor receives audio from your child’s room, it transmits it through your Wi-Fi network using either 2G or 3G cellular networks (depending on whether you have a cellular plan).

In short, baby monitors use radio waves to transmit information from the camera to the parent unit.

There are many different wireless technologies that are used in this process, but all of them rely on the same basic principle: radio waves.

The benefits of wi-fi are way more beneficial as it allows for better range and more features because of it’s nature.

Read this blog here about can you use a wi-fi baby monitor without wi-fi?